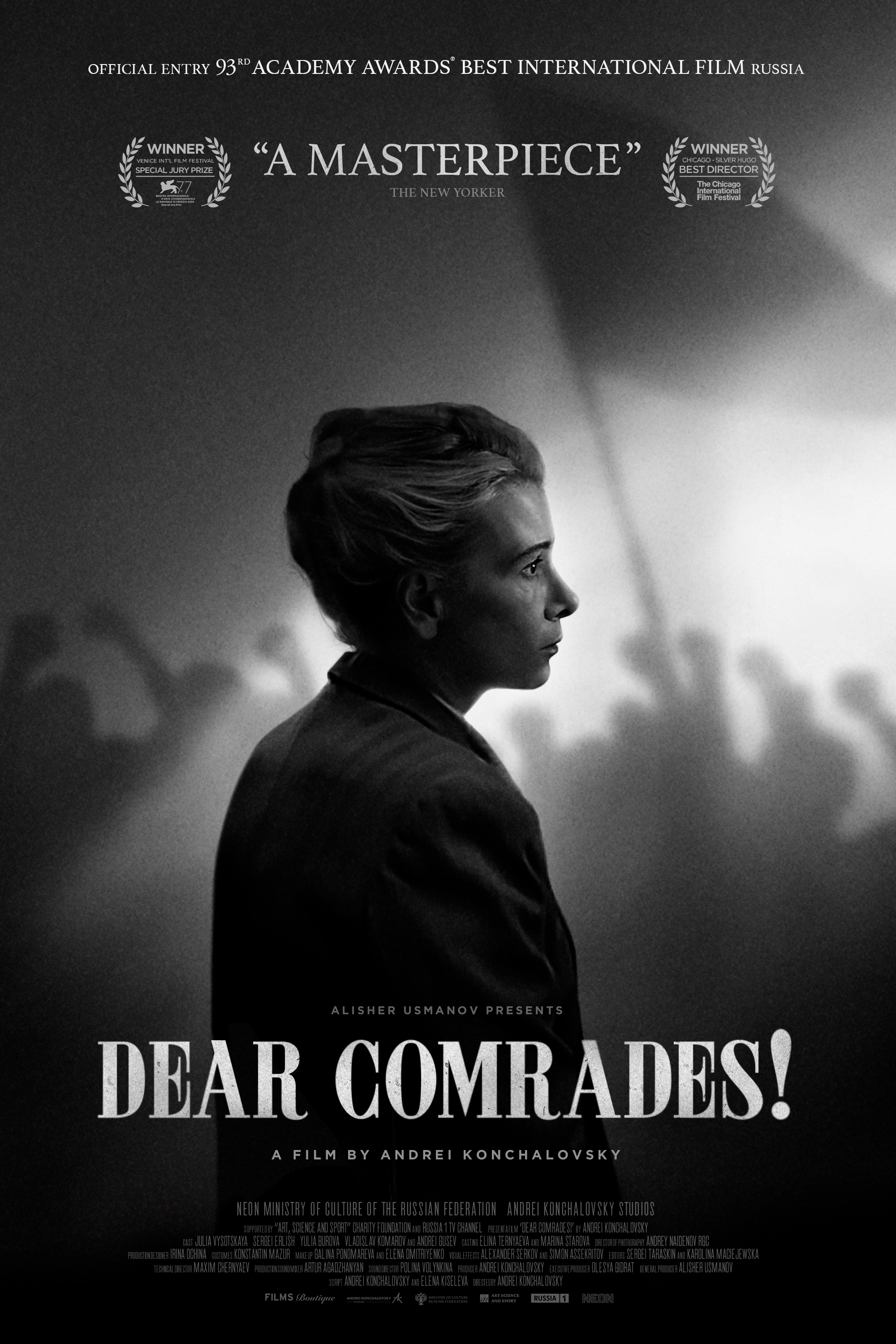 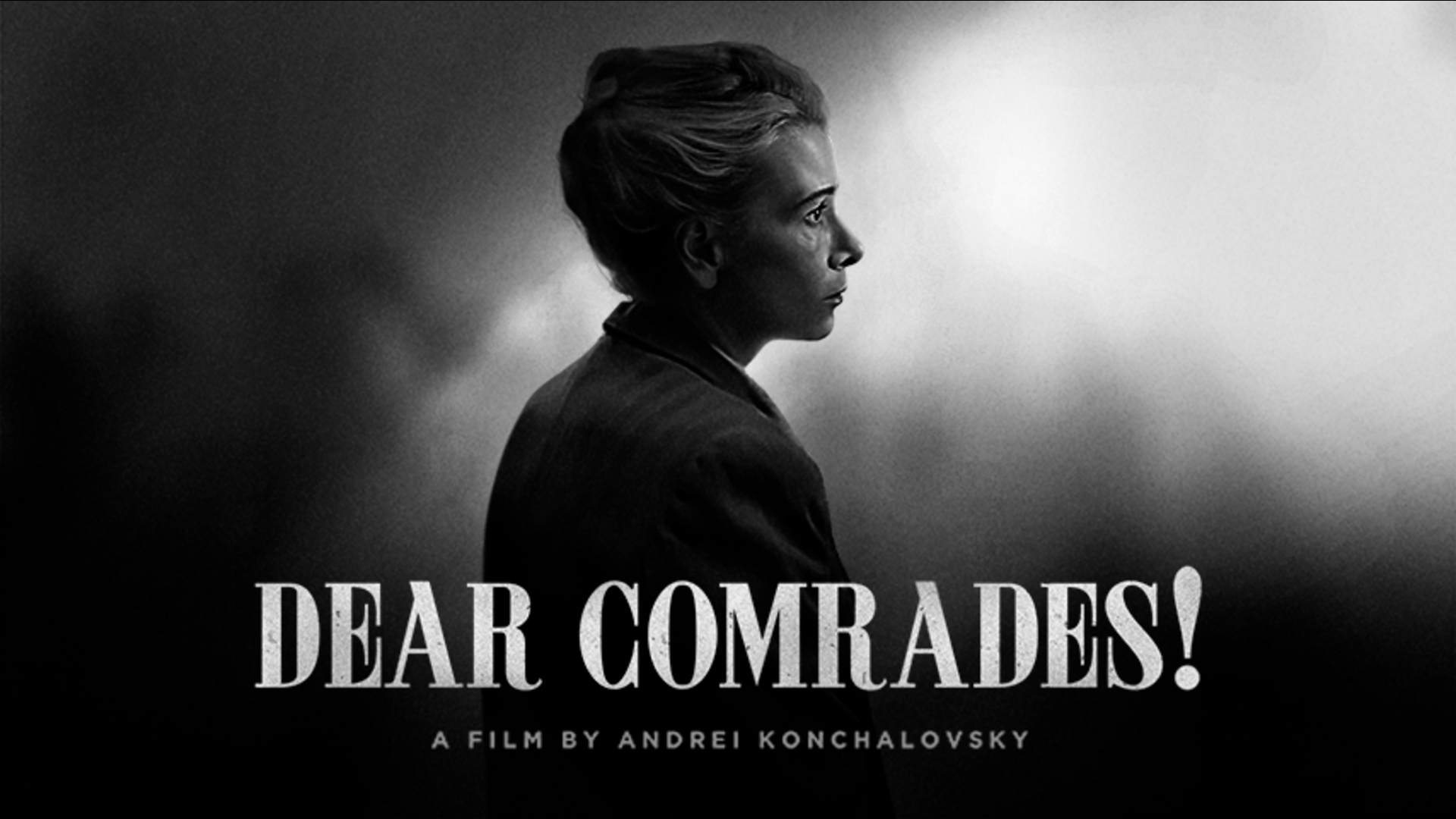 Oscar Submission (Russia). "Andrei Konchalovsky, shooting in black-and-white, meticulously reimagines early 1960s Khrushchev-era Russia, mixing dark humor with a potent recreation of an event shrouded in secrecy by the Soviet government for 30 years. When the government raises food prices, locomotive workers in the industrial city of Novocherkassk go on a mass strike. Local party bureaucrats fumble the response, leading to a massacre — and in the ensuing chaos, one of the activists who disappears is the daughter of a staunch, now conflicted, Communist party loyalist. Julia Vysotskaya (lauded for her riveting performance) still misses Stalin and can barely pass the portrait she keeps of him in her family apartment without saluting." - Film Forum. Bonus: a special pre-recorded conversation with Andrei Konchalovsky, Julia Vysotskaya, and Eric Kohn exclusively available on Virtual Cinema! (Directed by Andrei Konchalovsky; Russia, 2021, 120m).

“KONCHALOVSKY’S MASTERPIECE. The artistry is calm, controlled, persuasively detailed... Catch it if you can. Beautiful and damning, DEAR COMRADES! is also an act of remembrance.” – Anthony Lane, The New Yorker

“A scintillating, surgical exposé of Khrushchev-era oppression… A 1962 massacre in the Soviet Union is reclaimed from its historical cover-up by Andrei Konchalovsky’s pristine, extraordinary drama… Perversely beautiful and coldly furious... meticulous and majestic, epic in scope and tattoo-needle intimate in effect.” – Jessica Kiang, Variety

"Now in his 80s, Andrei Konchalovsky, the veteran Russian director... has made one of his most Russian, and most accomplished, latter-day films… Carried off with evocative precision and a cannily underplayed emotional tug. The drama keeps a well-calibrated balance between political horror, the matter-of-fact texture of everyday life, and the rhetoric that keeps the Soviet machinery oiled – and that Lyuda is struggling to see through. The film’s magnetic centre is a strong performance from Vysotskaya, working from a base line of initial testiness to rising anxiety and terror in face of the oppression that she realises she has been enabling.” –Jonathan Romney, Screen Daily

“Although at first sight this dramatization of a 1962 strike at a factory in the U.S.S.R. may seem a long way from the interests of contemporary audiences, it is surprising how much resonance the film has with the political struggles of our own time. much credit due to Julia Vysotskaya and her uncommonly gripping perf in the main role.” – Deborah Young, The Hollywood Reporter

“A fascinating blend of dark satire and bleak archaeology. Rendered in grainy black-and-white and framed in academy ratio, the film evokes the look of Soviet (and, of course, Hollywood) films of the era, cementing it within this very particular historical moment. The film’s anchor is Lyuda, played with remarkable grit by Julia Vysotskaya… To exhume the violent state oppression of the Soviet Union is hardly new, but it has been rarely depicted with such bluntness… DEAR COMRADES! is very much rooted in the history it seeks to depict. This is no doubt down, in part, to the film’s production design: Arguably its strongest aspect, everything from the era’s brutalist architecture to its faded propaganda posters are astutely reproduced. It’s like holding a relic in your hands.” – Jack King, The Playlist 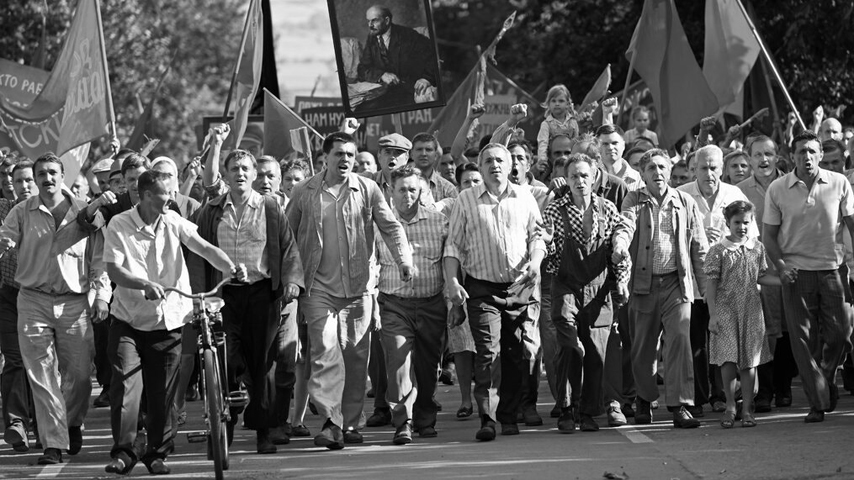